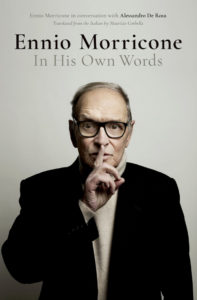 “This book is in Morricone’s own words, “beyond a shadow of a doubt the best ever written about me, the most authentic, the most detailed and well curated. The truest.”

Often considered the world’s greatest living film composer, and most widely known for his innovative scores to The Good, the Bad, and the Ugly and the other Sergio Leone’s movies, The Mission, Cinema Paradiso and more recently, The Hateful Eight, Ennio Morricone has spent the past 60 years reinventing the sound of cinema. In ENNIO MORRICONE: IN HIS OWN WORDS (July 2019), composers Morricone and Alessandro De Rosa present a years-long discussion of life, music, and the marvelous and unpredictable ways that the two come into contact with and influence each other. In the discussion, Morricone divulges a rich and exciting account of his life, from his early years to his collaborations with legendary Italian and international directors such as Leone, Stone, Nichols, De Palma, Tarantino, Almodovar and many more.

“Throughout his long and distinguished career, Ennio Morricone has consistently proven to be one of the most imaginative and idiosyncratic composers in the history of cinema. This book reveals the powerful personality behind his brilliant work and will be rewarding reading for anyone interested in the magic of music in film.” – John Williams

“Maestro Morricone has moved my soul to places I could not go alone. An inspiration like no other.” – James ‘Papa Het’ Hetfield, Singer/Songwriter of Metallica

“I feel so fortunate to be alive at a time where I can say that I have witnessed the work of a genius as he weaves his magic in unlimited ways, in infinite settings, with that rare quality of being distinctive and innovative while always being instantly identifiable, and doing all of this in the service of the film at hand, honoring and enhancing it in ways that are indescribably detailed, vivid and perfect. Maestro Morricone is one of my major heroes.” – Pat Metheny

“I have the absolute highest amount of respect for my brother Ennio and I will always be one of his greatest admirers. When I was studying in France, my teacher Nadia Boulanger used to tell me that ‘your music can never be more or less than you are as a human being,’ and I truly believe that is why Ennio’s music is so special: he is simply a great human being! Ennio is the definition of ‘original’ and his compositions are like a window into his mind: incredibly beautiful and genius!” – Quincy Jones

“This book is a must for anyone who admires the music of Morricone.” – Chris Green, Suffolk & Norfolk Life

“The book is set up in an interview style, so the conversation is easy to follow. Each section focuses on the directors Morricone worked with for a particular period of his life, the major films of the period, and his compositional style during that time period. In discussing his evolving style Morricone also references his work outside the cinema world. Summing up: Recommended” – CHOICE

I find it curious to look back on and re- examine my own life through a process of this sort. To be honest, I would never have thought I would end up doing it. Then I met Alessandro: gradually and rather spontaneously this project developed, and I found myself re- establishing connections with parts of my life that were resurfacing bit by bit. I almost didn’t realize it as it was happening. I can now say that I have adopted different views about certain events of my past, those that take place over the course of a lifetime without leaving enough time to ponder them and put them into perspective. Perhaps this long exploration, this intense reflection, has been important and even necessary at this point in my life. Most of all, as I have since discovered, facing my memories has not simply caused me to become melancholic about things that slipped away with time; it has also encouraged me to look ahead, to realize that I am still here to wonder what else may happen. This is beyond a shadow of a doubt the best book ever written about me, the most authentic, the most detailed and well curated. The truest. – Ennio Morricone

The book is available also in other languages: 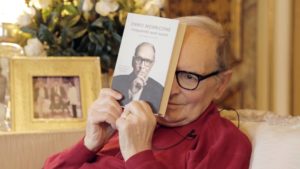